Although OFF times and dyskinesia are common aspects of living with Parkinson’s and are both linked to Parkinson’s medications, they are not as alike as you might guess. In this post, we highlight the differences between OFF and dyskinesia and strategies to manage them.

Dyskinesia is an uncontrolled, involuntary muscle movement that, unlike tremor, is irregular in motion. In people with Parkinson’s, it is most often associated with long-term use of levodopa or other Parkinson’s medications that increase dopamine levels in the brain. While dyskinesia is a minor annoyance for some, for others, it can interfere with daily life and compromise gait and balance. It can also lead to embarrassment or unwanted attention during everyday social activities, such as dining in public or grocery shopping.

In similar ways, feeling OFF can cause someone to experience gait and balance issues, avoid public gatherings and self-isolate, and experience a lowered quality of life. OFF, however, is much more nuanced than dyskinesia. How you feel when you’re OFF—when your medications aren’t working optimally, and your Parkinson’s symptoms return—can be difficult to describe, ever-changing, and completely unique to you. While dyskinesia can also look different depending on the person living with it, it presents in common ways and typically is more easily recognized by friends and family.

Levodopa-induced dyskinesia causes symptoms ranging from writhing or wriggling to dramatic rocking and head bobbing, from minor tics to full-body movements. Dyskinesia can also cause swaying, which can be embarrassing on its own and even more so when you’re walking. Some people with dyskinesia fear others will think they’re intoxicated and, combined with other Parkinson’s symptoms such as freezing of gait, rigidity, and balance problems, walking around in public can feel too vulnerable to do.

OFF times look different for everyone. For some people with Parkinson’s, OFF presents as slowed movement, reduced mobility, increased tremor, muscle cramping, rigidity, balance issues, stiffness, shortness of breath, and/or swallowing issues. OFF isn’t always a visible state; it can be a period when your non-motor symptoms increase, and you experience fluctuations in cognition, attention, anxiety, depression, and apathy. OFF can also cause a person with Parkinson’s to experience increased sweating, lightheadedness, abdominal pain, bloating, urinary issues, visual disturbances, pain, dysesthesia, akathisia, and/or restless legs syndrome.

Parkinson’s-related dyskinesia is generally believed to be caused by disease progression and long-term use of levodopa medications. As Parkinson’s progresses, deteriorating dopamine brain cells have increasing difficulty in managing normal movement. Levodopa medications replace normal dopamine, which helps with motor control. Over time, it may be necessary to take more frequent doses of levodopa to manage motor symptoms. When levodopa is administered in frequent doses (e.g., 100 mg every four hours during the day), the levels in the blood vary between doses, creating “peak” and “troughs” rather than continuously replacing dopamine. This has the potential to damage dopamine receptors over the years, eventually causing Parkinson’s dyskinesia. Like dyskinesia, OFF times are closely tied to levodopa. When your levodopa isn’t working well enough to manage your symptoms, those symptoms return. There are several reasons levodopa can stop working optimally, including:

How can I manage dyskinesia?

If you experience dyskinesias that are bothersome and/or present most of the time, one management strategy is to reduce your dosage of levodopa or other related Parkinson’s medications. However, if doing so would adversely affect the control of your chief Parkinson’s symptoms, your doctor may prescribe treatment to target the dyskinesia specifically. For example, the FDA has approved an extended-release formulation of amantadine (GOCOVRI®) to treat levodopa-induced dyskinesia in people with Parkinson’s. Another option is to consider other forms of amantadine, which are approved to treat Parkinson’s and may be prescribed off-label to treat dyskinesia. Many people with Parkinson’s find that exciting and emotional settings, even positive and joyful ones, increase dyskinesia. Strong feelings of stress, anger, and happiness can trigger the release of the brain chemical norepinephrine (the “fight of flight” response), which  increases involuntary movement. Calming activities such as meditation, yoga, tai chi, massage, and breathing exercises do the opposite. They lessen your sympathetic nervous system’s responses to emotional situations. Incorporating these practices into your daily life can strengthen your inner peace and manage your dyskinesia.

To overcome the challenges that come with walking while dyskinetic, you can walk with poles, walk so that your heels land first (which engages a part of your brain other than the one that is affected by Parkinson’s), listen to upbeat music to help you step in rhythm, and pay attention to your breathing, which reduces stress and minimizes dyskinesias.

How can I manage OFF?

Because feeling OFF means different things for different people, the first step is realizing what OFF means for you. Track your motor and non-motor symptoms throughout the day, paying close attention to how you feel before and after each dose of medication. You can download our fillable symptom tracker here and our fillable OFF tracker here to make this process easier. Be proactive and speak up about your symptoms and any ON/OFF fluctuations you experience at all appointments. Take these questions with you the next time you go to get the conversation about OFF started.

An important step in minimizing OFF is to understand what causes it to begin with. When you understand the science behind Parkinson’s OFF, you can use this knowledge to your advantage and get the most out of your Parkinson’s medications. Take time to explore how changes to your lifestyle, including optimizing hydration, nutrition, and exercise, can help you reduce OFF times.

Talk with your Physician about Medication Adjustments

As Parkinson’s progresses, your brain produces less and less dopamine. This means it must rely much more heavily on medications to control your symptoms. Yet as Parkinson’s progresses, many people begin to experience fewer benefits from their medications, and the benefits may also be less consistent. Extended-release medications can help reduce OFF times by providing a more constant level of levodopa in the bloodstream and the brain. GOCOVRI, mentioned earlier as FDA-approved to treat Parkinson’s-related dyskinesia, has been demonstrated to reduce OFF times. Medication treatment options that can minimize OFF times through extended delivery include the extended-release carbidopa/levodopa drug Rytary®, the rotigotine patch, extended-release pramipexole, and extended-release ropinerole.

Continuous dopamine stimulation (CDS) can also help reduce OFF times. The goal of CDS is to help the brain maintain more constant levels of dopamine; it does this by imitating the brain’s typical, continuous pattern of stimulating dopamine receptors. By keeping dopamine levels more constant over 24 hours, CDS can help reduce OFF times, improve sleep quality, and positively impact quality of life. Options for CDS include continuous carbidopa/levodopa enteral suspension, DBS (the same surgical therapies listed above as treatment options for dyskinesia), and subcutaneous apomorphine infusion. During this procedure, apomorphine is administered through a portable, battery-powered mini-pump that injects the medication under your skin, usually into your abdomen.

As you can see, whether you’re experiencing dyskinesia, OFF, or both, there are many actions you can take to manage these challenges and live well with Parkinson’s today.

This blog series is sponsored by Adamas. 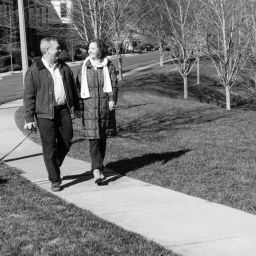