We recently hosted a webinar with Dr. Joohi Jimenez-Shahed about the latest advancements in deep brain stimulation (DBS). You can get access to the recording here. We received so many questions during the session that we weren’t able to answer them all; so, Dr. Jimenez-Shahed was kind enough to do some written Q&A for us.

Does a DBS device cause a problem going through security at the airport?

It is possible that the body scanners or anti-theft devices will detect the DBS hardware and trigger an alarm, or that the DBS system could get turned off. Take your device card and show it to the security personnel, who can direct you how to proceed. Be sure you have your patient controller to check your device and so you can turn it back on in case it is inadvertently turned off during the security check.

Can you discuss the two locations in the brain that are sites for DBS?

The two main sites in the brain that are used for DBS in Parkinson’s are the subthalamic nucleus (STN) and globus pallidus interna (GPi). Both of these are part of the movement circuitry that is affected by the loss of dopamine in the brain. Studies indicate that people with Parkinson’s are likely to get the same motor benefits from either STN or GPi stimulation – meaning reduction/improvement in OFF time, improvement in ON time without troublesome dyskinesia, reduced dyskinesia, and improved tremor. However, people receiving STN DBS are able to reduce their medications more than those who receive GPi DBS. While the amount of medication reduction may seem appealing, it may not be the best strategy for everyone, since we know that medications often do more than simply treat movement symptoms.

I’ve had great outcomes since having DBS three years ago, but over the past couple of years I’ve had more daily fatigue. I don’t recall having this issue as much prior to my DBS surgery. Is there a correlation between the two? Any suggestions on how to improve this symptom?

Fatigue is a challenging feature of Parkinson’s with or without DBS. There are many potential causes including other medical issues, medications, sleep problems, mood symptoms, cognitive changes, and the Parkinson’s itself, to name a few. Sometimes these have to be reviewed or tested sequentially to find opportunities for improvement.

Would a cardiac pacemaker on the left side of the chest interfere with DBS function?

There are many people with Parkinson’s who have both pacemakers and deep brain stimulators in place. Usually, the DBS battery is placed on the right side of the chest when this is the case. The pacemaker itself does not create any interference with the stimulation being provided, but there are some situations where a pacemaker may interfere with the brain sensing that is possible with certain DBS device. It may also pose challenges with obtaining adequate brain imaging if that is ever required.

Is an MRI of the head contraindicated with people with DBS?

All DBS manufacturers have systems that are compatible with brain MRI imaging, but the specifications of the type of imaging are different between manufacturers and according to the specific hardware/hardware combinations you have in place. Brain MRIs can therefore be performed safely when the correct conditions are present and there are no hardware problems on your system. Some devices do have a patient-enabled “MRI mode” that can be activated when needed. However, not all imaging centers are capable of providing the safety parameters that are required for safe brain scanning. It is therefore a good idea to check with your treating neurologist when brain imaging is being requested to discuss safety parameters, enabling MRI mode, and where to have the imaging done.

Is DBS indicated for use in people with Parkinson’s who experience freezing of gait and also speech dysfunctions?

Speech problems are similarly likely to improve after DBS if they are better when ON medications. After DBS, speech problems can develop because of stimulation-induced side effects or Parkinson’s progression.

Gait and speech functions are both assessed during the pre-operative DBS evaluation OFF and ON medications, so they can be discussed in terms of expectations for outcome. Make sure you ask your treating neurologist specifically about the likelihood of these features improving after DBS if they’re symptoms you’re hoping will get better.

Is DBS neuroprotective? Is it neurotoxic?

There is no evidence to date that DBS is neuroprotective. We know that DBS treatment does change the level of symptom control and so will improve functioning and quality of life, but it is does not slow the progression. Similarly, there is no evidence that DBS hastens the progression of Parkinson’s. There may be surgical or stimulation side effects that create new challenges, but usually for reasons that are not related to Parkinson’s progression.

Can DBS exacerbate anxiety and depression caused by Parkinson’s?

Generally speaking, anxiety and depression are not primary symptoms that are expected to change with DBS. However, if your anxiety or depression are definitely worse when your medications wear off, the fluctuations in these symptoms can improve after DBS. On the other hand, if your anxiety or depression are not managed optimally before entering into the DBS treatment process, it’s possible that these features may continue to be problematic or impact your post-DBS care. We generally recommend that people with Parkinson’s receive assessment and management of their depression and anxiety before DBS. There are certain situations where the stimulation that is required to adequately treat motor symptoms of Parkinson’s with DBS also affect pathways of the brain that impact mood and behavior, and some patients experience changes in these features as a result.

Is the Neuralink device currently under development by Elon Musk being considered for use in the treatment for Parkinson’s, or as an alternate to DBS?

Neuralink is a brain machine interface that allows a computer or other digital device to directly communicate with the brain,  so that when physical impairments prevent function, thinking about certain actions can actually lead to them being performed. For example, a paralyzed person might be able to control a computer mouse or keyboard. Better control of motor functioning in Parkinson’s is also being investigated, but will work very differently than DBS, as no stimulation will be delivered.

Does one episode of Reversible Cerebral Vasoconstrictive Syndrome rule me out for DBS? Does a history of migraines rule me out?

Generally speaking, a single episode of this uncommon condition may not rule out the possibility of DBS, but a full medical clearance is required prior to having DBS, and this should be specifically discussed. Recurrent migraines are not a contraindication for DBS.

I had DBS surgery three years ago and my voice is becoming progressively weaker. Is this perhaps due to the DBS? I have had the frequency reduced with little if any change to my voice. Is there anything else that can be done?

Progressive speech problems after DBS can be tricky to sort out. Some people with Parkinson’s experience worsening speech because of stimulation-induced side effects, and others may develop it due to the progression of their Parkinson’s. One way to investigate this further is to assess speech with the stimulator on, on at higher settings, on at lower settings, and off to determine if there are situations where the speech seems better.

Do you foresee any similar types of treatments to DBS being developed in the future that may help treat symptoms that DBS can’t right now?

There is a lot of fascinating research underway in the field of neuromodulation, many geared at better treating symptoms or minimizing side effects. Some of these look at using different types of stimulation waveforms, or detecting symptoms that people with Parkinson’s are experiencing and feeding them back into the stimulation system. As we understand more about how the brain is wired, there will undoubtedly be pathways to simultaneously treating symptoms not currently addressed by DBS, such as non-motor symptoms. 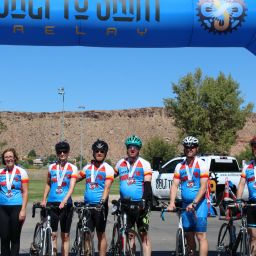