Each month, we spotlight an inspiring story from someone in our Team DPF community who is helping to improve the quality of life of people living with Parkinson’s by raising funds. Today, we are happy to feature Pete Huley from Beaufort, NC.

How did you find out about Team DPF?

I was diagnosed with Parkinson’s in late 2013. A couple of years later I learned about the Davis Phinney Foundation, and in 2016 while I was visiting my daughter Krista in Colorado, I went to the headquarters. I met Heather Caldwell there, who shared so much great information about the Foundation’s programs, literature, and mission.  I got very jazzed about everything the Foundation does.

During that trip, I started boxing at The Corner Boxing Club in Boulder. Krista had told me about the Power Punch for Parkinson’s class, and I loved it — so much that I wanted to bring something like it to my hometown. When I returned to Beaufort, I got to work with a friend in my Parkinson’s support group, and we applied for a grant and were able to start a boxing program for Parkinson’s in our area!

Meanwhile, Krista herself got involved with the Boulder boxing club, and like me, she loved it. She signed up for the Founder Fight and turned it into a fundraiser for the Davis Phinney Foundation.  Because she raised more than $3,000, she was invited to the Team DPF Banquet, and she invited me to join her.  That’s where I met many of the Foundation’s staff, had the wonderful opportunity to listen to Davis and Connie speak, and learned about Team DPF and RAGBRAI (the Register’s Annual Great Bike Race Across Iowa).

WHAT EVENTs have YOU PARTICIPATEd IN AS PART OF Team DPF?

In 2018 I participated in my first Tour of Sufferlandria® (ToS). I had seen something about the Tour in a Team DPF newsletter, so I looked into it a bit more and thought it looked interesting. I signed up for the two-week trial and then got the subscription to do the first tour. Then I was hooked. I love the chit-chatter of Sirs David and Dylan; they do so many creative things to raise money. I’ve done every tour since my first in 2018, and I am ready for ToS 2021! What do you love about the Tour?

The tour integrates the international Sufferfest™ crowd with the Davis Phinney Foundation crowd. It’s amazing that there is this international group that comes together, puts so much energy into the Tour, and raises money for Parkinson’s and for Team DPF.  And because of Davis Phinney’s connection with bike racing, it’s even more special.

The Tour is a lot of fun and a lot of work.  You build camaraderie with the riders. It’s a positive group and the Davis Phinney Foundation is a positive group, and you get to see these two groups uniting to support each other and help people with Parkinson’s. I love to see the large number of people who come together for this cause.

And it doesn’t hurt that I’ve won some fantastic Wahoo gadgets through the Tour’s prize pool!

What Team dpf events have you done most recently?

The Foundation’s Every Victory Counts Challenge in 2020. It was a great fit this year because of the pandemic; it boosted my personal activity level and kept me from falling into a habit of not doing much of anything.  Sometimes it just takes a little extra encouragement to keep up, and the Challenge did that for me.

I also attend Team DPF weekly yoga on Zoom, along with my daughter Colleen. Colleen had gotten into yoga a few years ago and convinced me to try it out, but I really got into it with The Sufferfest’s 30-day program led by Abi Carver.  I liked it and kept it up. Yoga is very beneficial and keeps things from going downhill for me like they can do if I’m not stretching.

Team DPF, Sufferfest, and Rock Steady Boxing all give me that little push to keep moving.

WHy do you fundraise FOR THE DAVIS PHINNEY FOUNDATION?

I believe the Davis Phinney Foundation has a very unique focus in the world of Parkinson’s.  There are a lot of Parkinson’s organizations out there, but the Foundation is right on target with today — how you’re going to live well today.

It’s that positive aspect of helping individuals in this mind-game of living with Parkinson’s. They’re part education and part living by example. They give you the push to do what you need to do.

All the people at the Foundation are so positive and committed to helping people with Parkinson’s. And what they provide is free, even when there’s a cost involved for them.  They make a big difference, and it’s important to support an organization that is doing that.

For my fundraiser, I thought that because the Foundation is such a strong organization and ToS is such a unique activity, the two partner so well that it’d make it easy to take that next step to fundraise.  I could just say, “Here’s what I’m doing; here’s how you can donate.” Team DPF makes it easy to put the mechanics of fundraising together.

What Davis Phinney Foundation programs do you find most beneficial?

I love the Every Victory Counts® manual and promote it regularly. When I was first diagnosed, I wanted as much info as I could get about Parkinson’s, and the manual includes it all.

And this year, more than ever before, the Foundation has put so much great information online — the webinars are excellent! To be able to access that info online, in your own house, is wonderful.  You can do it in real-time or watch it later. Having that available and easy to access is very important.

Parkinson’s is a mental game. Some days you come out ahead, and some days you don’t.  The webinars, the stories that the Foundation shares, the features about technical advances or the way individuals are handling their situation, are very important, especially on those days when you need a boost.

What advice would you give to someone interested in the Tour of Sufferlandria?

It’s a big challenge, it’s a lot of fun, and it’s an opportunity to raise money for a worthy organization, the Davis Phinney Foundation!  What the Tour does, and the cycling it promotes, is very consistent with what you have to have to deal with when you’re living with Parkinson’s.  It’s a good marriage of the activity and the mental aspects of dealing with Parkinson’s. It all blends together. Give it a shot!

Tour of Sufferlandria, for sure.

Want to learn more about Team DPF and upcoming events?

Sign up for the Team DPF e-newsletter, and save the date for Tour of Sufferlandria 2021 on Feb 15-21.

Your story, like Pete’s, could be featured on our blog and Facebook page so others can learn from your experiences, victories, and fundraising adventures. 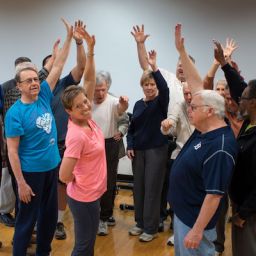