What has your journey been like since your Parkinson’s diagnosis?

I was diagnosed with Parkinson’s in 2013 and feel as though my journey thus far has been relatively benign.

When I was first diagnosed, I went into a veritable tailspin. The only person I knew at that time with Parkinson’s was my older brother, Dave, and he was less than encouraging about our future prognoses. However, once I realized that Parkinson’s was not a death sentence, I got to work researching this crazy illness.

I signed up for every clinical trial and study I qualified for, determining that hanging out with Movement Disorder Specialists (MDSs), PAs, and Ph.D.s was not a bad place to be. You can be sure that whenever I had their ear I peppered them with questions. I figured since I was agreeing to ride something like a mechanical bull, try new drugs (or a sugar pill since one was a double-blind), get poked with needles, give them my blood, spend a day in a sort of isolation chamber so they could figure out if my metabolism and calories burned are different since I have Parkinson’s, take surveys out the wazoo, etc., etc., etc. . . . I figured that it wasn’t asking too much to pick the brains of these specialists.

Having always been extremely active, I liked hearing that the best medicine for Parkinson’s is exercise. I don’t think that it’s a coincidence that I was diagnosed shortly after a total knee replacement and just before back surgery. A sedentary lifestyle is bad for people with Parkinson’s. I was intrigued by the study that Dr. Curt Freed from UCH conducted. Alpha-synuclein is thought to play a significant role in the death of brain cells for people who have Parkinson’s. Placing mice with Parkinson’s on a running wheel stopped the accumulation of alpha-synuclein and they demonstrated much better movement and cognition than that of the control sedentary mice. The running mice somehow had turned on the protective DJ-1 gene. I figured that if it’s good enough for laboratory mice, it’s good enough for me. So I guess you could say I am running for my life.

I first became acquainted with the Davis Phinney Foundation at one of their The Victory Summit® events. But where I really came to love the Foundation was through Copper Triangle. We live in Dillon, CO, and I learned about the Triangle the day before the event. So my husband, Dan, and I went out to Copper that night and signed up. This was with no training at all; so, I agreed to only ride from Minturn to Copper.

When I reached the aid station at the top of Vail Pass, I went up to some bikers with Davis Phinney jerseys on and thanked them for all they do for people with Parkinson’s. Davis stepped forward and shook my hand and congratulated me for making it all the way to Vail Pass. I told him that I’d only started in Minturn – that was all Dan would agree to since I hadn’t trained. Davis told me that he had started at East Vail because that was all that Connie would agree to. Since then we’ve ridden more Copper Triangles and been leaders of Team Move That Mountain, raising funds for the Foundation. I love that the Foundation encourages us to make lifestyle changes that slow down the progression of Parkinson’s. I wish I could say the same for all Movement Disorder Specialists. I met with a functional movement disorder PA and told her all the treatments and therapies that I’d been trying; acupuncture, massage, intermittent fasting, good nutrition, exercise, cold laser, supplements, etc. Very matter-of-factly, she told me that Parkinson’s is a progressive neurological disease and I cannot expect to mitigate its advancement. I feel as though the Davis Phinney Foundation’s mission is exactly the opposite.

I’m excited to support this mission in any way possible. I’m grateful for the opportunity to speak into the lives of others with this challenge and make a positive difference for them. There is so much to learn and this is a thrilling time to be alive. I feel as though cutting edge research and studies are underway.

I realize that it’s very possible that we may not see a cure for Parkinson’s in my lifetime. But lest I get discouraged, I believe that God has a reason for putting me in this place in this time in history and, if I can make a difference in the lives of others with this challenge, then it will be worth it.

Patti Burnet is one of the newest members of our cohort of Davis Phinney Foundation Ambassadors. Our Ambassadors are “living well leaders” who share resources and information throughout their local and regional communities to help people take action and improve their quality of life with Parkinson’s. Connect with one of our Ambassadors and begin your journey today of living well with Parkinson’s!

Your story, like Patti’s, could be featured on our blog and Facebook page so others can learn from your experiences and victories. How Pushing My Limits Helps Me Live Well with Parkinson’s

Though Patti Burnett has faced many injuries and struggles, she challenges herself to live well each and every day. 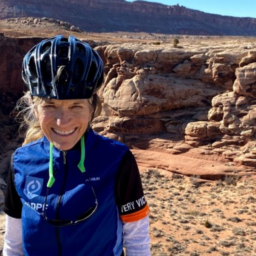 A Day in the Life of a Parkinson’s Ambassador: Patti Burnett By Lorraine Wilson, Davis Phinney Foundation Ambassador My dream of diving blossomed in sixth grade, when I learned enough about… A Letter to My Newly Diagnosed Self You’ve Got a Friend in Me: Tales from Two Davis Phinney Foundation Ambassadors

Davis Phinney Foundation Ambassadors are at the heart of what we do. From speaking with individuals and families to presenting…