Parkinson’s in My House

Parkinson’s entered our lives when our kids were small and Davis’ career was thriving. But truly, it had been lurking and provoking us for years. Fatigue was the primary early symptom that affected our marriage and family, but Davis unwittingly was dealing with various symptoms. I remember nagging him to pick his feet up when he walked because he stumbled a lot. His voice softened and TV producers asked him to better modulate his voice, but he couldn’t seem to do it. The tremor emerged in the spring of 2000, and that is what finally got him to the doctor – or in his case, to many doctors.

Diagnosis is traumatic. And for a while it felt like the bottom had fallen out of his world. Max Testa, his cycling team doctor from Italy, remarked that it would take him two years to adjust and adapt to this new challenge. He was right. But the neurologist who told him that he’d feel “as good as ever” was wrong. So, you get mixed messages from even the doctors, and in the end, how you respond to the diagnosis really depends on where you are in your life.

Once we settled into the new life – post-Parkinson’s diagnosis – we did realize how lucky we were in one sense. Davis stopped travelling. He had been on the road working somewhere between 75 and 100 days of the year. This was far less compared to his previous life as a cyclist, when he was away more than 150 days of the year. But it was a lot for the kids and for me. So Parkinson’s gave us one treasure: We got Davis back. He is a gifted father. It would have been a shame for him to miss so many of the fun years with the kids.

My dad told me an interesting thing one night when we were talking about the course of his life. He said that when my mom was diagnosed with multiple sclerosis, he lost his ambition. He wondered aloud if that was a bad thing. I asked him, “In what regard?” And he said that he was content with his family business and never had the desire to risk growing it. He thought maybe he could have made more of his life. I told him that he was the best dad imaginable, and that I was so grateful for that. While I knew he worked hard, he put his family first, and caring for us kids and my mom was his best work.

For me, when pressed, I can tell you that watching my strong man (Davis) suffer is tough; the diminishment of so many of his strengths is heartbreaking. It is our reality, and we accept it. There’s a fine line between giving in and giving up. I think we strive to stay on the high wire every day. Some days, he has to give up some of what he’s planned to do, but it’s not like throwing in the towel. It’s the rest required of a soldier who is preparing for another day. Together we soldier on. Some days feel more daunting than others, but we know good days will come.

On a daily basis, the hard part has been to keep Davis tasked. I could do it all, and people who know me can attest to this. If I did do it all, I’d probably start to feel angry and overburdened. I realized that Davis needed to be engaged in his daily life, and if he was going to stay home, he had better contribute. I give him duties and departments – cars, bikes, dishes, for example. Initially the Bike Camp business was thriving, and I still needed him to help with that. Physically, when he couldn’t manage riding his bike, he could photograph our clients and provide slide shows or videos of the week-long tours. I learned to parcel out tasks that he could do. Granted, the fog that he often lives in mentally and the weight of Parkinson’s on him physically make every day challenging, and often we need to be spontaneous in terms of what he can do, day by day. I find that if we try to share the burden – if we share the weight of the load – then each of us feels better. Care Partner Support: Learning to Find What You Need My father was diagnosed at the young age of 40. I don’t think that even now I can wrap my head around how he must have felt that day, but I do know that he did not stop fighting and living. How to Communicate with Children about Parkinson’s

Learn ways to communicate with children of different ages about Parkinson’s. [Video] On Being a Parkinson’s Care Partner with Lianna Marie

Lianna Marie, who served as her mother’s caregiver and advocate for more than 20 years through the many stages of… Living well with Parkinson’s means living well in all aspects of your life—physical, mental, social, spiritual. One provider can’t possibly treat every part of your… Introducing the new Every Victory Counts® Manual for Care Partners

Whether you are the spouse, partner, child, parent, sibling, or friend of your person with Parkinson’s, you are an invaluable… 5 Ways to Manage Apathy as a Parkinson’s Care Partner

Simply defined, apathy is a loss of motivation, desire, and interest. In reality, however, apathy is anything but simple. A… 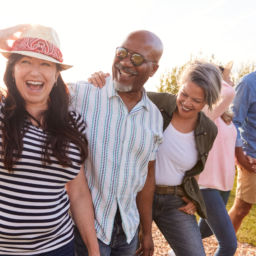 How to Build Your Care Partner Care Team

Just as many people can help your person with Parkinson’s live well, there are many whom you can add to… 7 Resolutions to Live Well as a Parkinson’s Care Partner

Living well as a Parkinson’s care partner can be challenging, but there are many steps you can take every day…

Parkinson’s is in my house too Connie. My husband was diagnosed in 2008. But like you mentioned, the fatigue was in our lives long before that. I had no clue why he is not helping me. When we were walking, he did not swing his arms, he put hands in his pockets. He would shuffle his feet. Now I know why. We just attended the Victory summit in Toronto. Gave me a great inspiration. We are not alone on this journey. Thanks to you all for a informative session. Love Tajinder.

Thanks for commenting, Tajinder and we hope you enjoyed the Victory Summit in Toronto! One of our primary goals, especially with our Victory Summit, is to show that you are never alone on this journey with Parkinson’; there is a community around you that you can lean on and share your experiences with at all times.

My husband has had Parkinson’s for 22 years and we have been in leadership roles in our local Parkinson Chapter since then. We thought your Victory Summit was one of the most positive events we have attended and appreciated your caregiver breakout session and your blog.
We admire Michael J. Fox and all his Foundation has done to raise money for research but the Davis Phinney Foundation’s focus on making life better for PWP is so affirming and gives people things they can do for themselves. Thank you. You are both an inspiration.

Thanks for commenting, Vivian. We are glad you gained so much from our Victory Summit and we able to learn more about Connie and her story as a care partner. We hope you take the message of living well and share it with your chapter and those in your community!

Your comments were so enlightening. Like you, we noticed things quite some time before his Parkinson’s diagnosis came. He lacked his usual high energy, walked looking down at the ground and his body language seemed to project depression. It was not until a physical therapist suggested we look into Parkinson’s on the Internet that we then sought medical advice.

Many people live with Parkinson’s for years before an official diagnosis is made and can usually pinpoint when the onset of symptoms began in retrospect. As Connie mentioned, news of a diagnosis is overwhelming but it’s important to take this news and develop a proactive plan for the future. Thanks for commenting, Cathy!

I love hearing Connie speak about her life with Davis. Every time I want to empty the dishwasher I remember Connie mentioning to keep our loved one with Parkinson to task around the house. No I should not ask John to clean out gutters on our home or do I expect that, but the daily things that make life easier really helps. Some days daily walks on the beach turn into sitting waiting for dystonia to pass on his left foot. Listening to sound of the waves and the peacefulness of being on the beach is one of our joys I intent to keep our time together on beach as long as possible. Thanks Connie for all you do.

Thank you for commenting, Bernadette!

My cycling clown team from Dom. Republic visited Davis and Connie several years during the early 2000’s to train in Boulder, Co. What a class act. The finest people in cycling I have met. My last year there Davis had recently been diagnosed and was still riding with us. Our love to Davis, Connie and their family.

Thank you for sharing, Francisco! We’re so glad you joined Davis and Connie for training and we will pass along your well wishes. Keep pedaling!

Hi Kathleen – In order to read replies to your comments, you can go to the post you originally commented on. In this case, you commented on this post: https://www.davisphinneyfoundation.org/blog/senior-citizens-marijuana-and-parkinsons-what-ive-learned/ and this post: https://www.davisphinneyfoundation.org/blog/tips-for-when-youre-awake-in-the-night. I hope that helps.

Thank you so much for your newer, Melani. I will check or the sites you indicated. I’m greatly appreciative. I kind of feel lost sometimes, so thank you so much!

You’re welcome, Kathleen. You’re not alone and please reach out to us if there’s anything we can do to connect you to others who can help you on this path.