I was diagnosed with young-onset Parkinson’s at 32. My second child had just been born, and I was working as a registered nurse. Despite my job, I didn’t know what to expect. I didn’t see many patients with Parkinson’s at the clinic. I had visions of myself in a walker, shuffling my feet. I was terrified. But I refused to believe this would be my new reality and began researching what I could do.

I soon discovered that exercise helped me push through my Parkinson’s symptoms, including daily freezing episodes and muscle rigidity. Of all my workouts, boxing helped me the most. I started working with a local trainer who guided me through intense workouts where I pushed my limits physically and mentally. When I felt my body responding positively, I started to believe in the power of boxing for people with Parkinson’s. It had such a profound impact on me that three years ago I co-founded Neuroboxing, a nonprofit that offers non-contact boxing classes specifically designed for people with neurological conditions like Parkinson’s.

After my diagnosis, I went through a difficult time. I was raising young children as a newly single mom and I didn’t know anyone else going through what I was. About four years after my diagnosis, I began to experience OFF periods—the re-emergence of motor and non-motor Parkinson’s symptoms—which made it difficult for me to keep up at work and at home.

I realized I couldn’t do this alone. Being around others and sharing my experience became crucial to living well with Parkinson’s. I learned how important it is to seek out support groups and to talk to my family members and my doctor about all of my symptoms.

Additionally, I’ve found strength and support in sharing my story and journey with OFF periods with the Parkinson’s community. Recently, I participated in Framing OFF Through Art, an initiative from Acorda Therapeutics that uses the power of art to illustrate how OFF periods impact those living with Parkinson’s.

Sometimes OFF periods can be difficult to identify and describe because the symptoms differ from person to person. As part of the project, I spoke with an artist about OFF periods and my journey with Parkinson’s, and afterwards, she painted her interpretation of my experience. When I first saw the artwork, I was surprised and moved by how well Anita Kunz, the artist, captured our conversation. You can see the artwork and the video about my story here.

Being part of Framing OFF Through Art highlighted the importance of talking openly about all of my symptoms, especially those that may not be as obviously connected to Parkinson’s, and how a visual can help explain how someone feels when words can only go so far.

I’m also president of the NeuroCommunity Foundation, a speaker for the Michael J. Fox Foundation, a participant in multiple Parkinson’s Foundation Moving Day Walks and a Women in PD advocate. In 2015, I joined the “10 Mountains 10 Years” project, which raises awareness for Parkinson’s and Alzheimer’s, and I climbed Mt. Etna in Italy.  All of these activities keep me engaged with the community. I will be rejoining the team (10 Mountains 10 Years) with a return to Italy in June to take on a new challenge, the Pilgrimage to Enlightenment, a 100-mile Camino in 9 days.

I was working with Rock Steady, an organization dedicated to training people with Parkinson’s through non-contact boxing and had become a certified Boxing Coach. I was teaching community classes and people were lining up after class to ask me questions not only about boxing through my Parkinson’s but also about Parkinson’s in general. I realized that some of the people coming to my classes were people I hadn’t seen in support groups or at advocacy events. My class was the first exposure to the Parkinson’s community for some. They wanted information and resources but didn’t know where to turn.

Being a former nurse, I knew I needed to help. I had a desire to support people after they left my class. Neuroboxing was born as a way to provide not only the physical activity that helped me push through my OFF periods but also the community of support that I wished I had immediately after my diagnosis.

You do not have to do this alone. You can find support. Boxing changed my life and provides me with the support and confidence I need to communicate openly about my personal journey with Parkinson’s. I was always hesitant to let others see me while I was OFF or discuss my symptoms openly, but I know I need to do this to live well. It makes a big difference to meet people who know what you’re going through, who can motivate and inspire you.

Jennifer Parkinson is president and co-founder of Neuroboxing and the NeuroCommunity Foundation. She’s been living with young-onset Parkinson’s for 13 years and recently participated in an initiative called Framing OFF Through Art, detailing her journey with Parkinson’s and OFF periods through artwork. You can view Jennifer’s story here.  Framing OFF Through Art is part of Acorda Therapeutics’ “Live Well. Do Tell.” initiative. To learn more, click here.

Your story, like Jennifer’s, could be featured on our blog and Facebook page so others can learn from your experiences and victories. My Sense of Smell

The Parkinson’s Poet mourns his loss of smell. Wayne A. Gilbert is back to perform the poetry he writes to help him live well with Parkinson’s. Parkinson’s Poetry: Wayne A. Gilbert Performs Parkinson’s Is Nothing Like Boxing

Have you ever thought that Parkinson’s is just like boxing? Wayne A. Gilbert doesn’t think it is. Today, Wayne talks about working out with Parkinson’s. A little bit of love and a lot of laughter helps MK live well with Parkinson’s. Let’s Sketch Together Live on Thursdays During April!

Have fun and play with sketching this Thursday, March 26th. 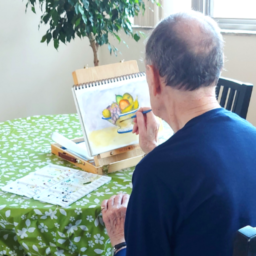